Collegium Monacense of St. Michael's is a professional vocal ensemble that cultivates the tradition of the court chapel, i.e. music performed around the time of St. Michael's original construction. The ensemble's sound is ideal for performing works of the early modern era, particularly Renaissance and early Baroque music. But the Collegium also tackles music in all other styles and from all eras (in appropriately varying sizes).

In recent months, one focus has been on Spanish and English Renaissance music (Victoria, Byrd, Tallis) as well as on music of the Romantic period, with motets by Felix Mendelssohn.

Under its founder and director Frank Höndgen, the Collegium Monacense of St. Michael's collaborated with the ensemble "Stimmwerck" for a recording of T. L. De Victoria's "Missa Ave Regina caelorum" in 2007. In late 2009, the ensemble performed settings of Marian texts from the 20th and 21st century at the festivals "Tage neuer Kirchenmusik - Offenbarungen II" and "Münchner Orgelherbst" in liturgy and concerts.

Major milestones in recent years include the liturgical performance of H.I.F. von Biber's "Missa Salisburgensis" for 52 voices (2014), Bach's Mass in B minor (2017), and, as part of the first Easter Festival at St. Michael's in 2018, Monteverdi's "Vespro della Beata Vergine" and Bach's "Easter Oratorio." 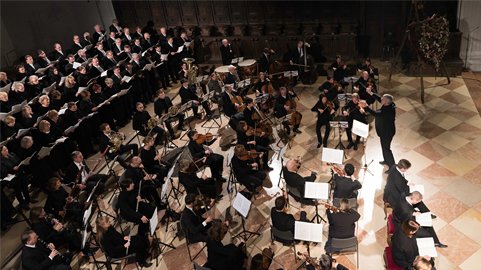 The choir and orchestra of St. Michael's have by far the longest and richest tradition of all the musical ensembles connected to our church. They can look back at a history that spans more than 400 years, starting with the consecration of the altars in 1592, which was accompanied by then maestro di capella Orlando di Lasso. Today the choir and orchestra are essential elements in the great concert of all musical ensembles at St. Michael's.